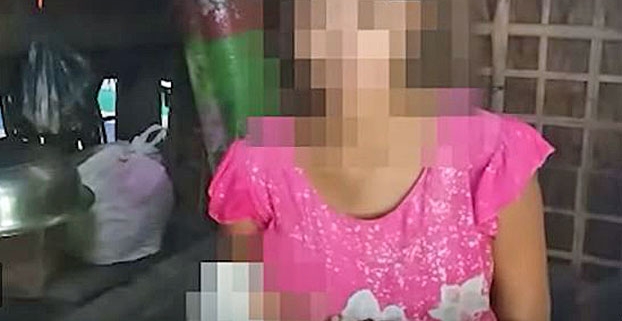 Police in western Myanmar’s volatile Rakhine state investigating the rape of an ethnic Rakhine woman during military operations in her village last week have summoned witnesses to provide their accounts of the alleged assault, a township administrator said Tuesday.

The 36-year-old mother of four children told RFA on July 2 that she had been sexually assaulted by four uniformed Myanmar soldiers in rural Rathedaung township on June 30 when they found her and some relatives hiding in a bomb shelter in their home during an army sweep of U Gar village to clear the area of rebel Arakan Army (AA) troops.

Sheltering with the woman in the bomb shelter during a military campaign that displaced 20,000 people were her daughter, infant granddaughter, mother, aunt, and mother-in-law, said the woman, who declined to be named for safety reasons. Her husband, who has worked in neighboring Thailand for the past six years, was absent.

Soldiers who entered the house discovered the women when the baby cried out, she said.

“They told me I had to give them either my life or my body,” she told RFA. “I refused them, and they threatened me by pointing their guns at me, saying they would kill me if I ran. I tried, but they stopped me.”

“If I hadn’t let them do what they wanted, my life would have been in danger, and my family members could have been killed, too,” she said. “Then they raped me.”

Afterwards, the soldiers instructed the women not to tell anyone what they had done and handed her 20,000 kyats (U.S. $14).

They soldiers intended to rape the victim’s daughter, but her mother-in-law begged them not to because the younger woman had given birth six days earlier, she added.

“After the military received the report, we investigated the claims and released a statement saying that we found it not to be true,” he told RFA.

“Some cases are made up,” he added. “People may have filed complaints. Whether the crime really occurred or not, the victim side can file a report if they believe that they have been hurt.”

On Tuesday, Rathedaung township administrator Aung Myint Thein told RFA that Colonel Min Than, Rakhine’s security and border affairs minister, ordered him to bring the woman and the witnesses to the state capital Sittwe for questioning.

“The Rakhine state border and security affairs minister asked me to summon them,” he said, adding that state police took the U Gar village head, his clerk, and three women who were with the victim in the bomb shelter and questioned them in Sittwe for about 12 hours.

“I was there with them,” he said. “I just got back home, but the three women are still there for questioning. I was not questioned.”

The alleged victim’s sister-in-law told RFA that the police asked her about the rape and about the soldiers taking the victim’s daughter, intending to sexually assault her.

The woman’s aunt also said that she told the police all she had observed because she wants justice for her niece.

“No woman would degrade herself by coming out as rape victim,” she said. “We are just worried that we won’t get justice for her. We just want justice.”

RFA has withheld the names of the witnesses, as well as the identity of the alleged victim, to protect their safety and privacy.

When contacted by RFA, Police Lieutenant Colonel Maung Maung Soe of the Rakhine State Police Force said he did not know about the questioning of the women.

“They can’t be questioned unless they filed a complaint about the rape case, but they didn’t,” he said. “I haven’t heard that the plaintiff has filed a case either, so it is impossible that they have been questioned. The witnesses can testify only after the victim files the case.”

Colonel Min Than, who requested the meeting with three women, told RFA that police had not  questioned them, but rather asked for their observations.

“We didn’t question them,” he said. “We just asked them if they had something to say or to report and asked them how we could help. They were saying different things.”

United Nations officials in Myanmar have urged authorities to fully investigate the case and prosecute the perpetrators.

“The U.N. is aware of the accusation that three soldiers raped a woman in Rakhine,” a U.N. officer who declined to be named told RFA in an email.

“Authorities should investigate the accusation as soon as possible,” the person wrote.” If the crime occurred, then the accused should be put on trial and action should be taken against them.”

Aung Myo Min, director of human rights education group Equality Myanmar, called for a thorough independent probe of the case based on evidence and facts, and not just a military investigation.

“An independent investigation should be carried out for this case that would ensure objectivity in the judicial process,” he said.

Reports of Myanmar military “clearance operations” to ferret out AA soldiers in Rathedaung in June prompted about 20,000 civilians to flee the Mu-sae Kan area of southern Rathedaung township where U Gar village is located.

The villagers made their way to Sittwe and other safe places amid fighting between Myanmar and Arakan forces that has raged in northern Rakhine state for the past 18 months.

Locals said a military column entered U Gar Village on June 30 and opened fire, prompting most residents to flee to nearby communities out of fear of being detained and questioned on suspicion of possible connections to the AA.

But the woman who was attacked and her relatives stayed behind and hid because it would have been difficult for them to flee with the newborn, villagers told RFA.

Before the soldiers left U Gar village, they recorded videos of three elderly men, who out of fear said that the troops had not stolen any of the villagers’ jewelry or animals or raped any woman, they said.