When Tang Seng heard gunshots close to his village in Myanmar, he had a choice: carry his grandmother away from the fighting on his back or run for help. She asked him to kill her and leave her there but he refused. 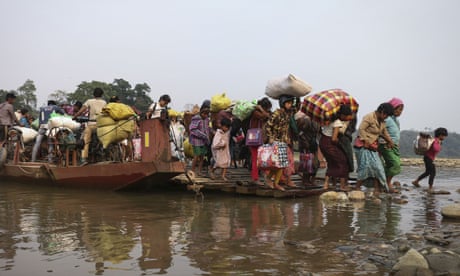 Tang Seng walked out of his village carrying Supna Hkawn Bu to a makeshift camp for the displaced, where they remain with their family. She has had to flee from conflict five times in her life and didn’t speak for two days when they first arrived.

War in Myanmar is synonymous with the Rohingya crisis but Tang Seng and his grandmother are not Rohingya refugees. They are from the country’s north, in the state of Kachin, where another brutal but far less well publicised conflict is playing out between the largely Christian minority group and government militias.

For centuries, the Kachin, who number about 1,600,000, lived in relative peace in the northern Myanmar mountains near the border with China. After Myanmar gained independence from the British in 1948, they were promised equality and self determination. However, conflict broke out after the military seized control in 1962 and the Kachin Independence Army (KIA) was formed to defend Kachin land.

When Aung San Suu Kyi came to power in 2016, it was hoped she would put a stop to the fighting. But, as with the Rohingya crisis to the south, the situation has worsened.

Aung San Suu Kyi has called on rebel armed groups to sign a National Ceasefire Agreement – which was brokered between Myanmar’s quasi-civilian government and eight rebel groups in October 2015 – but the KIA is unwilling to lay down arms while the military bombs Kachin villages.

“What we are seeing in Kachin state over the past few weeks is wholly unacceptable, and must stop immediately,” Yanghee Lee, the UN’s human rights expert for Myanmar, said last week. “Innocent civilians are being killed and injured, and hundreds of families are now fleeing for their lives.”

“Today all the ethnic people from our viewpoint are just existing, they are just protecting their land and trying to share [human]rights together,” says Kachin parliamentarian Ja Seng Hkawn Maran.

That violent pacification is intensifying in Kachin. Since April, more than 6,800 villagers have been forced to flee mortar and heavy weapon attacks. That number adds to the 130,000 Kachin who have been displaced over the decades. Many are stranded in the jungle or trapped in conflict zones. Meanwhile, aid agencies say they are being blocked from providing food and other vitals supplies to civilians trapped in the forest. Blocking aid agencies is a violation of international humanitarian law.

San Htoi, the joint general secretary of Kachin Youth, echoes Naw. “It is an invisible war.” She points to the recent United Nations security council visit which included only Rakhine state. “They left the country without knowing [about Kachin].”

A war over natural resources

San Htoi attributes the recent surge in conflict to a military new strategy: erase the KIA or force it to sign the ceasefire agreement.

But there is another reason the military wants control of Kachin. The area that Supna Hkawn Bu and her family fled is not just home to villages and rice fields. It is also the location of a wealth of amber mines. Elsewhere in the state, there are lucrative jade mines.

San Htoi says the war in Kachin is primarily a war over rich natural resources. The total export figures of illegal jade sales, made without formal taxation and usually smuggled across the border to China’s Yunnan province, is in the billions.

Fighting recently erupted in the amber-rich Tanai region in Kachin state and near the jade mines of Hpakant, with both sides jostling for control of these strategic areas, says a senior campaigner for Global Witness, Hanna Hindstrom.

Between 50% to 80% of jade is smuggled across the Chinese border, with little going to the government and even less to Kachin communities. Jade sales primarily line the pockets of well-connected cronies, military elites, drug lords, armed groups, and the Chinese, she says.

China, an ally of the Myanmar government, has remained silent on the Kachin conflict despite its border being in earshot of the mortar shells dropping. During the fighting, displaced civilians had previously been accepted across the Chinese border, but in 2017 the displaced population was sent back.

On the outskirts of the neutral Kachin city of Myitkyina, are scattered myriad camps for the internally displaced – with shelter ranging from permanent woven bamboo huts to makeshift tarpaulin tents.

The war will stop when one side totally disappears

One camp leader, U Thein Soe from Taagara Tayettaw, is pessimistic about the future of his people. “In my opinion the war will stop when one side totally disappears,” he says.

U Thein Soe retells with tired eyes that he was forced to flee his home after hearing fighting close to his village. “At first I didn’t have plans to leave. But all my friends and neighbours started to move. About 80% fled to China and the rest decided to move to Myitkyina. Now my village is like a scene from a horror movie.”

With little hope for their future, many young people are turning to drug use. Heroin is widely available in the region and costs about $4 to $5 a hit.

Nhkum Tang Goon, Myitkyina secretary for the anti-drug vigilante group Pat Jasan, describes the situation for his people as a “slow genocide”.

“The government has a purpose,” he says. “We feel it is … ethnic cleansing.”

Instead of deterring dissent, the renewed army assaults on the Kachin have spawned a protest movement. Over the weekend, demonstrations were held in Yangon by youth leaders. Eight people were arrested. “We need to raise our voices and let those in power be reminded that we don’t want war. It is their duty to end it …” said youth leader Thinzar Shunlei Yi.

Organiser of Kachin protests in Myitkyina who was also arrested, Seng Htoi, says she feels “so broken” when she sees so many young people displaced and persecuted. “The youth of today are the leaders of tomorrow. The future for the Kachin people is blinded by so much darkness.”

… we have a small favour to ask. More people are reading the Guardian than ever but advertising revenues across the media are falling fast. And unlike many news organisations, we haven’t put up a paywall – we want to keep our journalism as open as we can. So you can see why we need to ask for your help. The Guardian’s independent, investigative journalism takes a lot of time, money and hard work to produce. But we do it because we believe our perspective matters – because it might well be your perspective, too.

I appreciate there not being a paywall: it is more democratic for the media to be available for all and not a commodity to be purchased by a few. I’m happy to make a contribution so others with less means still have access to information.Thomasine, Sweden

If everyone who reads our reporting, who likes it, helps fund it, our future would be much more secure. For as little as £1, you can support the Guardian – and it only takes a minute. Thank you.