In 1998, the United Nations General Assembly adopted the United Nations Declaration on the Right and Responsibility of Individuals, Groups and Organs of Society to Promote and Protect Universally Recognized Human Rights and Fundamental Freedoms, commonly abbreviated as the ‘United Nations Declaration on Human Rights Defenders’. It aims to provide support and protection to human rights defenders (HRDs) in the context of their work. It not only addresses States and the human rights defenders community, but outlines that everyone has a role in promoting and protecting the human rights of all.

FORUM-ASIA believes that it is important to raise greater awareness about the declaration. In Asia, there is limited access and visibility of the declaration. The complexity of the language used can be an obstacle for those working at the local and community level to promote and protect human rights. Consequently, some people might not be aware that they are considered a ‘human rights defender’, which entitles them specific rights, as well as accords them certain responsibilities. They may also be unaware that the State has duties and obligations to protect and support defenders, and to create an enabling environment for HRDs to carry out their legitimate work.

2018 marks the 20-year anniversary of the United Nations Declaration on Human Rights Defenders. To commemorate this, FORUM-ASIA is raising awareness of the declaration in Asia from the period of July to September 2018. Part of these efforts has been the creation of a range of posters. Each poster will highlight and explain a specific area or part of the declaration. We hope to complement previous efforts made by the United Nations Special Rapporteur on the situation of HRDs and many other human 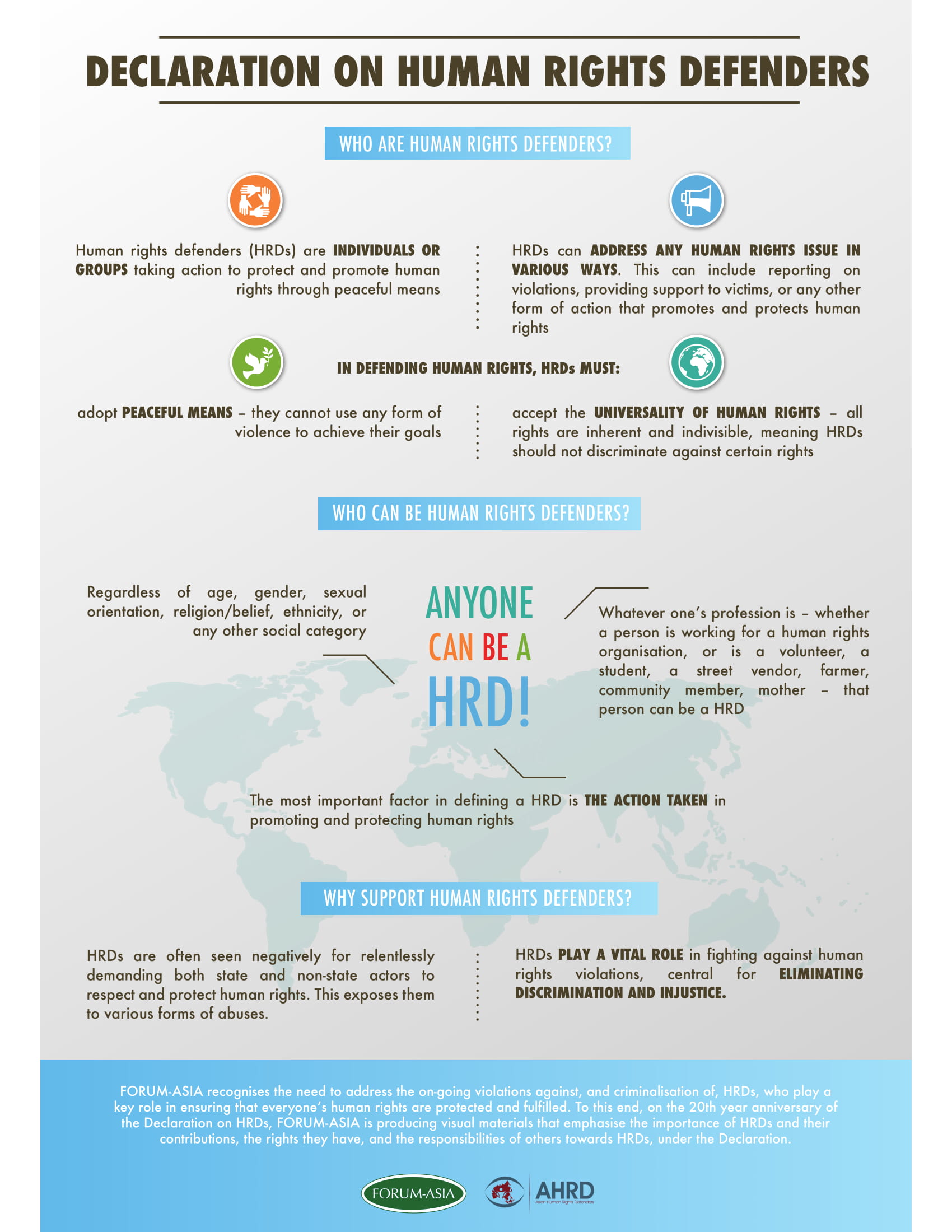 rights organisations that have previously raised awareness on the declaration. FORUM-ASIA has collaborated with member organisations to translate the posters into four Asian languages: Burmese, Mongolian, Tagalog, and Urdu.

All the posters are be made publically available. We welcome all, particularly HRDs to share and re-purpose them – for advocacy, trainings or otherwise – within their own communities and groups.

Poster 1, ‘About the Declaration’ – Burmese, English, Mongolian, Tagalog, and Urdu.